For the second time we found ourselves in the Square before St. Peters – This time we looked up at the colonnade that makes such a majestic place for the Saints that look down over the Square.  Everything is on such large scale it’s hard to appreciate the size of it all.

This building has over 3,000 rooms and over 7 miles of corridors – so by necessity we saw only a very small part of what there was there.  We did see beautiful tapestries centuries old – the detail work was unbelievable with such things as eyes that seemed to follow you – There were beautiful silks, gold & silver treasures, paintings, marble objects and a collection of original maps made in the 13th century – our guide made the remark that “these maps were made before we Italians found you Americans”

Of course the highlight of this tour was the Raphael Rooms and the Sistine Chapel.

Then it was in to beautiful Sistine Chapel so named from the Chapel Sistux IV hence the name “Sixtine” or “Sistine” – The figures on the ceiling show the training of Michelangelo as a sculptor (muscular and mostly nude) They  tell the stories from the Creation of the world, creation of man, expulsion of Adam & Eve from the garden – at one end of the Chapel is the famous Last Judgment & at the altar end the separation of Light & Darkness – In the former one can see the face of a man named Biagio who complained of the nudity of the figures done by Michelango so the artist included the man’s face – with a pair of ass’s ears – among the demons of Hell –

The story is told that when Biagio complained to the Pope he was told “I’m sorry my son, were you just in purgatory I could help; but in Hell you are out of my reach.”

The frescas on the side walls done by other famous artists go almost unnoticed but some of the most famous are: Moses crossing the Red Sea, the Sermon on the Mount, & the Last Supper – These plus 9 others all have Biblical topics-

Back into St. Peter’s again to see more of this beautiful chapel – and at close range

Very few people in the church this day, so we could stop and look at our own pace – This piece of sculpture would be impossible to describe

[Editor’s Note:  Mom obviously thought she didn’t need to mention that this is the Pietà by Michaelangelo. Less than fourteen months later, the sculpture was attacked by a hammer-wielding geologist, shouting “I am Jesus Christ!”  Since its restoration, it has been surrounded by bullet proof acrylic glass panels.]

After a turn around the great church we went up to the top of the building & stood behind the great statues you see from the Square below – The figures stand over 18′ high – on the roof behind them we saw & heard two things that just didn’t seem to belong here – first a “curio shop” with a very “tourist” flavor and secondly, a very loud recording of “Mack the Knife” filling the air –

Earl, JoAnne, and Tim decied to see Hadrian’s Tomb so we & Harold & Ruth struck off in another direction that took us first to the church of St. Maria Maggiore – the one built on the site of the miracle snow fall in August – Here we saw the very beautiful Holy Crib & the celing made by the gold that Columbus brought back from the new world.  The mosaics seen at the top of the columns are some ancient ones that were in the original church on this site in the 4th century.

A short walk & another very interesting experience awaited us at the Basilica of Saint Peter in Vincali where we saw an urn with St. Peter’s fetters (chains)  This beautiful statue of Moses done by Michelangelo is in this same church – the detail in the work is something to behold.

The very clever Romans have installed a lite that shines on this work of art only one deposts a lire or two for a few seconds of light for a better look or a quick snapshot.

It was back to the Hotel where our crowd a little tired but undaunted bathed, dressed & set out for one last fling in romantic Rome – After consulting all our guide books we decided that a place called “Romolas” sounded much to our liking so in two cabs we set out after discovering that one cab driver had never heard of it & the other said ” Romolas?” followed by a funny laugh –  Indeed it was a wild cab ride in heavy traffic with the second cab driver trying to keep up – finally we came to a screeching halt in a very dark, narrow street in front of a dingy looking entrance – after collecting the fare the two cabs left us there wondering so we went in here 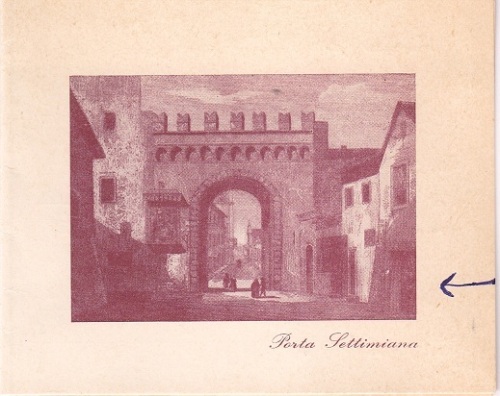 and how glad we were that we did –