After breakfast we headed back to the Trevi Fountain shops – where we’d seen glove & shoe shops that looked promising – & they were. Up to this time we’d seen this famous landmark in moon lite, in full sunshine, at sun set & this morning we saw it…

After breakfast we headed back to the Trevi Fountain shops – where we’d seen glove & shoe shops that looked promising  – & they were.

Up to this time we’d seen this famous landmark in moon lite, in full sunshine, at sun set & this morning we saw it in our first Roman rain fall –

Had lunch at “Engrio’s” near the fountain & then got two cabs to transport us out the Appian Way (the forerunner of all the roads of Europe )- built originally 300 years before the birth of Christ – This is the reason that during the infant stages of Christianity some important catacombs were located here.

We visited the Catacombs and the church of St. Sebastian – In these catacombs the bodies of both St. Peter and St. Paul were deposited & through the middle ages the spot was revered for this reason – In the lower level we saw tombs of men, women, & children who had lived in Apostolic days On the walls scribblings that told of those days such as “Peter & paul remember us” ” “Peter and Paul, pray for us” one reads “I partook of a refreshment-meal for Peter & Paul” (this in Greek – others in Latin) The symbol of the fish was frequently used –

St. Sebasatian (whose statue in the Church is stuck full of arrows) was a Roman soldier who was martyred for his Christian belief –

[Editor’s Note: That chariot would be Dad’s Fiat 124 Sport Coupe at home;  I remember his thrill on buying auto parts in Rome.]

By this time we all felt the need of a return to our Hotel, a rest, a bath  before we could do justice to another of those Seven course dinners –

From the outside we had second thoughts about going in – As we stood there on the side walk – a fellow American who read our minds, came out & said it was a wonderful place to eat & he was so right! 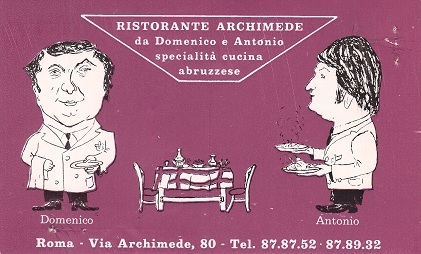 At this point in our trip I was wondering if I’d ever get my thoughts all organized enough to remember even a part of all we’d seen & heard.

[Editor’s Note:  I think we can all agree that she got more organized, thoughtful, and productive than most of us ever could.  One granddaughter commented that she could have had a career as a travel writer.  Just one of many things!]