The waiter was not impressed. I motioned towards my lunch companion and said, “Her grandmother and my great grandmother were sisters.” He paused and said, “Say that again.” So I did. “Oh. Can I get you started with some beverages today?” It didn’t…

The waiter was not impressed.  I motioned towards my lunch companion and said, “Her grandmother and my great grandmother were sisters.”

He paused and said, “Say that again.” So I did.

“Oh. Can I get you started with some beverages today?”

It didn’t matter. Mary and I were plenty excited without his help. Locating this second cousin once removed (long since gone from Texas) within 35 miles of home, has been one of the most serendipitous events of my genealogical journey.

We met for lunch this past week – the first of many meetings, we both hope. Pictures and papers littered the table after we ate quickly from the salad bar – no need to order and wait.  I described the scene in the Family History Library, when I first laid eyes on the Wilkins-Walling Journal, the publication she compiled. She signed my copy.

We came away with a personal connection and a sense of what we could accomplish together.

We both also came away with to-do lists – things to find, photographs to scan, topics to research, documents to email – areas that will bear fruit for future posts, no doubt.  But there were a few moments that really stood out.

I showed Mary a Walling genealogy report — one of my dearest possessions and a very early genealogy acquisition.  It was written by Thomas B. Walling (her great uncle and our 2nd great uncle) in 1916, typed on onion skin paper with the traditional blue law office cover.  In it, he described his trip to New Jersey to read Walling family headstones with a cousin and referred to other materials consulted, concluding the paragraph with “I mention all this so anyone can trace it all through genealogy I have prepared for future generations.”

Mary remembers Uncle Tom quite well – she was in her mid-twenties when he died – and as she looked at the document with his signature at the bottom, she said “He’s talking to us.  I just got the chills.”  And so had I.

This image also gave her the chills – the earliest one of our common ancestors, George and Louisa (Wright) Walling, with their oldest child, Cora – taken, probably, in the late 1850s. (1)

The daguerreotype is in the possession of older sister and we both admitted to a bit of envy that it lives in Colorado.  In the picture you can see the blue velvet cover Mom made to protect it.  I had rarely seen the image myself even though it hung in the upstairs hall gallery at home.

Mary had an Aunt Cora, named for that little girl, our great grandmother — and she was pleased to hear that we have a current-day Cora.  Really pleased.

I also took along a framed photograph of our grandmother’s wedding party. (2) 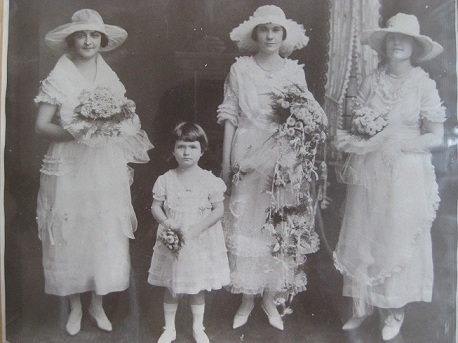 The matron of honor, Mrs. Landon Bradfield, was the bride’s cousin but I didn’t know which woman she was.  I figured Mary might.  And she is pretty sure that the woman on the left is cousin Nellie Elizabeth, daughter of Uncle Tom.  Even better — she is in touch with Nellie’s daughter, and knows she will be thrilled to see the picture.

There’s one other mystery she may be able to solve…. these pictures of our grandparents, taken about the time they became engaged, hung in a single frame in the hall gallery. (3)

Before I passed it to oldest sister, I took it apart to scan the photographs and uncovered this darling but unidentified little girl. (4)

I don’t know whether to hold Mom or Mopsy responsible for this one!  Maybe Mom inherited her picture frame recycling habit from her mother.  At least the picture was very well preserved.

Mary has an idea about her identity but I don’t want to jinx it.  I’ll get back to you on this one.  But here we are – at the Wallling Family Reunion! (5)

(1)  Photograph of daguerreotype of George Washington Walling, Louisa Wright Walling, and Cora Walling, late 1850s; daguerreotype privately held and photographed by Rebecca Lobato, [ADDRESS FOR PRIVATE USE], Ft. Collins, Colorado; scanned by Malissa Ruffner, 18 February 2011.  We had always been told that the daguerreotype dated to the Civil War “while George was home on leave” but looking at it now and knowing that Cora was born in 1856, I have revised the date.

One thought on “Walling Family Reunion”