Now that you’ve met the Williams family who arrived in Sierra Blanca 99 years ago, I’d like to introduce you to the sole Williams descendant in Sierra Blanca today – Tom D Ellison, son of Thelma Williams Ellison, and nephew of our grandfather. He is literally holding down the fort. His garage, Ellison Motor Co., 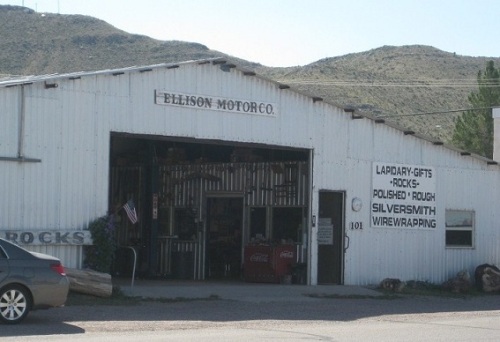 is itself a direct descendant of Blanca Motors, the Ford dealership founded by our great grandfather, Jesse D. Williams, across the street from the current location of Ellison Motor Co. Blanca did big business in the late 1920s. Among Tom’s many keepsakes are several Blanca Motors promotional drinking cups. As he pointed out to me, there were no water fountains and these cups were a travel necessity. 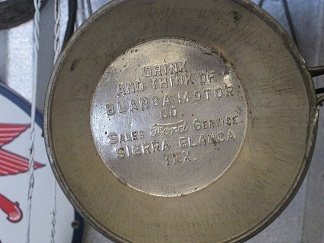 Later, Tom’s parents took over Blanca Motors and renamed it Ellison Motor Co. This picture is hanging in the garage office.

The house in which Tom lived from the age of 10 (which happens also to be the house where Mom spent her early years) is next door to the garage: 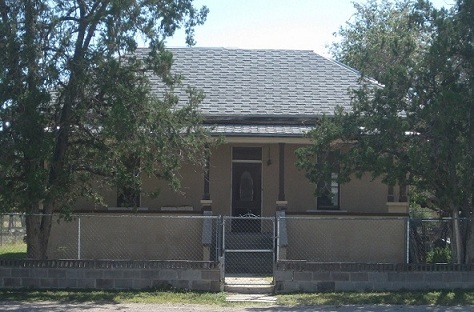 And the home that he built and where he raised his own family is immediately behind the garage. He has spent most of his life in a quarter-mile square. (There a picture of him as an infant here.)  But if you think that makes him or his life uninteresting, you’d be dead wrong.

Now in his mid-80s, he opens his garage every day – except when he doesn’t. 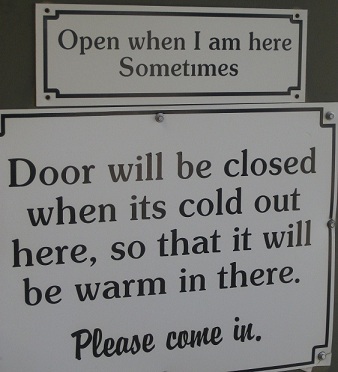 And what a place! The coffee pot is always full. 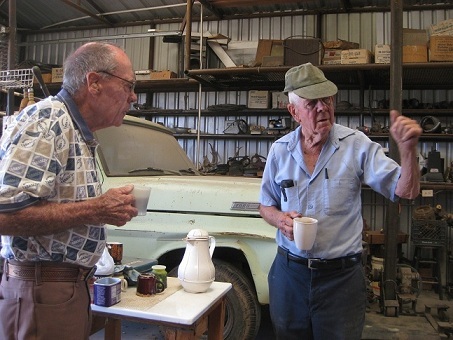 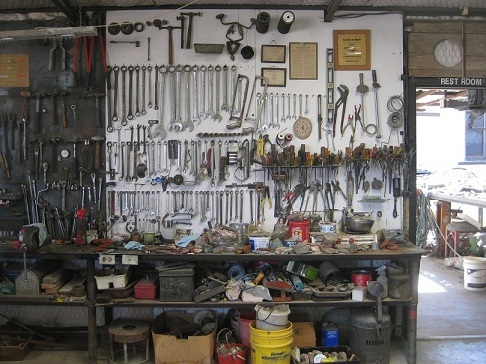 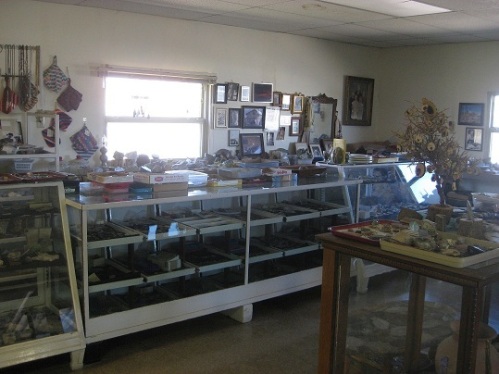 Some of his finest lapidary (I thought) is found in his personal collection of bolo ties.. 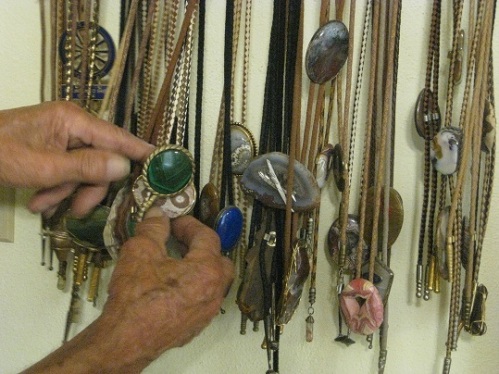 He collects and restores vehicles — here’s the ’39 Ford that was the last car purchased by his mother Thelma from the family Ford dealership: 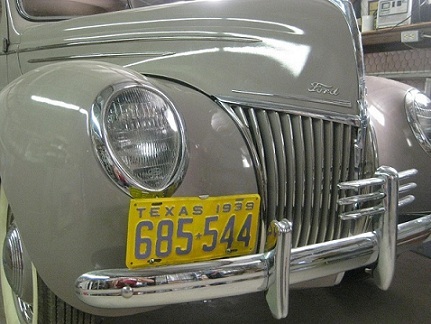 And a shiny red Model A: 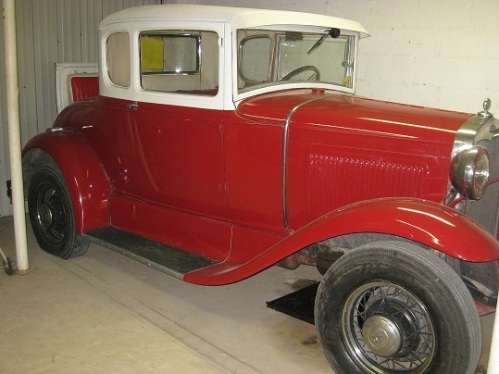 He still has the family wrecker, though it hasn’t been out on a call in years.  Guess how he got the wrecker in this structure… 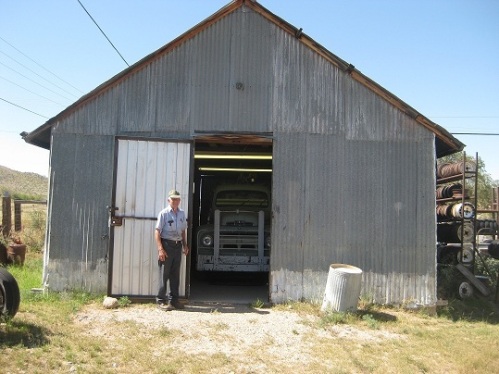 He built the structure over the wrecker in another location, poured the concrete on this spot, jacked up the building on the wrecker and drove it over. No kidding.

He also has a nice collection of Indian grinding stones carried in (somehow) from the desert: 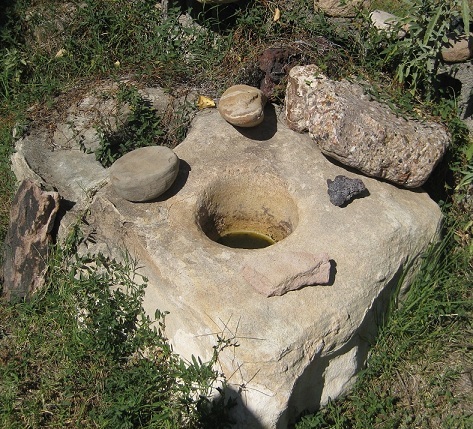 An attic full of antlers… 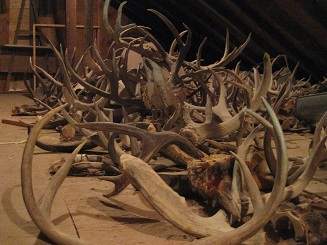 And numerous individual artifacts, many of which come with a story, like the chair hanging on the wall. 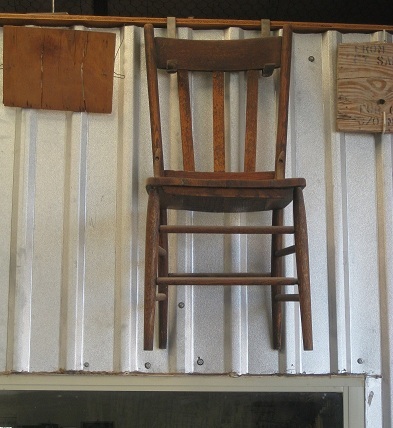 This story goes that Henry Wall, an old friend of Tom’s was at the Brite Ranch when he was a little boy and he and Mrs. Massey, the schoolteacher, had to hide under a dining room table when Pancho Villa led a raid there. Years later, Henry took the chair from next to that table and then passed it along to Tom because he knew Tom would take care of it.

At one point during our two days of visits, Uncle Jerry turned to him and said, “Tom, you ever throw anything away?” and Tom answered, “Not much.”

(You’ll have to imagine that exchange between two born and bred Texans to get the full effect. I honestly needed a tape recorder.)

A source of great pride to Tom is his father’s Texas Ranger service.  Here’s a picture of Duncan Clyde Ellison that hangs on the wall of the rock shop, inscribed “My Ranger Man” by Thelma: 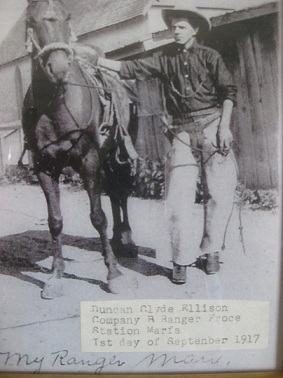 Tom learned of the Texas Ranger Memorial Cross program, secured a special marker for his father, and installed it himself at his father’s grave. 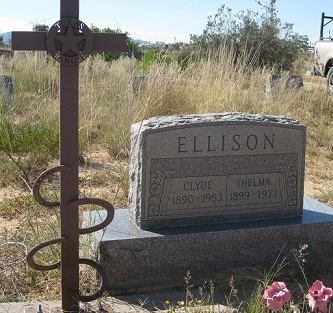 Tom has left Sierra Blanca – on at least several notable occasions. He mentioned a Lions Club trip to Australia. I’m sure there were other big trips and he does visit with family throughout Texas and Oklahoma but we didn’t dwell on travel stories. Most significantly from a family history perspective, he served in the Navy during WWII, on what was called a kiddie tour, a four year enlistment that ended on his 21st birthday. While stationed in England, he met his first wife, Jean. They were both very young, and after getting “permission from everybody in England,” they were married at St. Mary’s Cathedral in Taunton on May 22nd, 1945.

When Mom came east after marrying Dad, she was seen by some as an exotic creature from a far off place. I can only imagine the sensation created by the arrival of Jean!

Tom and Jean raised a family of three, kept bobcats as pets, and even had an antelope named “Lopey” that followed Tom to the garage every morning and had to be led back to his pen.  Sounds like never a dull moment.  Jean died in 1987 after 42 years of marriage, and Tom showed me her grave at the Sierra Blanca cemetery. Like his sister, Julia Mae, the back of Jean’s marker includes his nickname for her – “Tootlehopper.” 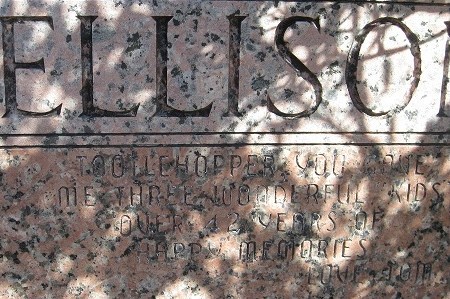 Tom has been remarried to a widow of a cousin for over twenty years. The two couples used to visit over the years and Tom claims to be one of the only men on earth to have a picture of his two wives together. And I can confirm that, in fact, he does have such a picture. He’s been lucky in life with women.

These days, Tom prefers to avoid the big city. So much so that when he had knee surgery, he rigged up his own recumbent bicycle from a chair salvaged from the old school for home-grown physical therapy… 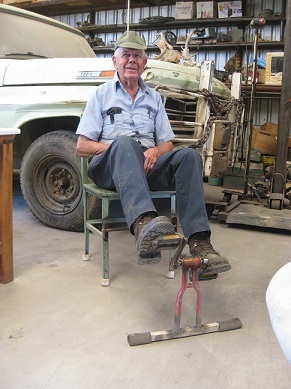 The doctor was amazed at his progress.  When Tom told him he was doing 2,000 revolutions per day, the doctor told him he could cut back to a thousand.

You won’t be surprised to learn that I’m not the first person who has tried to document the life and times of Tom D Ellison.  He’s been photographed, blogged about, and interviewed. Check out these photographs on Flickr, taken by Shaun Barrows – they do more justice to Tom, the garage, and the Texas sky than my camera could. Shaun passed through Sierra Blanca while helping a friend move and said that meeting Tom was a highlight of the trip. Thanks, Shaun, for allowing me to share the link.

It’s an honor to join the legion of fans of my first cousin once-removed, Tom D Ellison. If you’re ever in the vicinity of Sierra Blanca, you should stop by – you’d be welcomed. 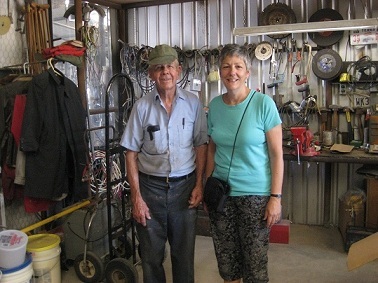