Take Interstate 10 southeast from El Paso to get to Sierra Blanca, the town where our mother was born and where she spent the first ten years of her life. It’s pretty much a straight-shot at a high speed, a legal 80 mph for a good stretch! (1) Unc…

Take Interstate 10 southeast from El Paso to get to Sierra Blanca, the town where our mother was born and where she spent the first ten years of her life.   It’s pretty much a straight-shot at a high speed, a legal 80 mph for a good stretch!  (1)

Uncle Jerry and I followed the Rio Grande River for a while when we left Fabens but then got back on 10.   (2)

There are a few interesting spots along the way, like the border patrol checkpoint and the section of road laid over clay that makes you feels like you’re driving on marshmallows.  We also slowed at one scenic bend and tried to pinpoint the location of this circa 1931 picture of Jerry and Mopsy (his mother, Amy C. Williams.)   (3) 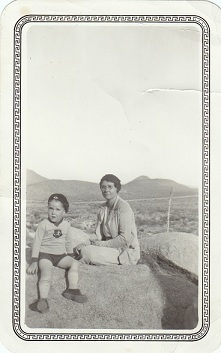 Coming from the other direction, the Jesse D. and Ocie Ola (Manning) Williams family got to Sierra Blanca nearly 100 years ago, migrating due west from Water Valley in Tom Green County, Texas. (I posted pictures of Jesse and Ocie’s graves here.)   At the time, Hudpseth County hadn’t yet been formed from El Paso County, but here’s a geographic visual: (4) 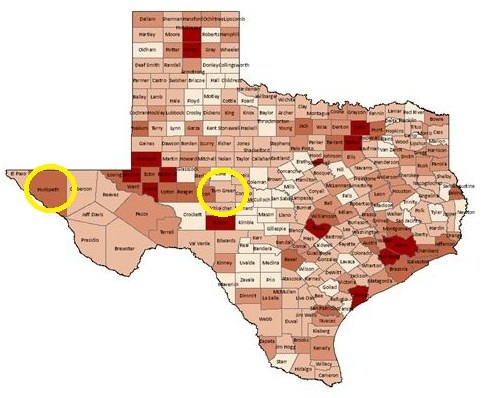 (It’s always such a shock to look at a county map of Texas when you live in state with only 24 subdivisions.)

There are more than a few Sierra Blanca stories to tell about my research trip. But first I want to formally introduce the Williams family — not quite a cast of thousands but still a good-sized clan.  I found a photocopy of the Family Bible record pages among Julia Mae’s files, and it supplies names and birthdates.

Although the original Bible was not in evidence and the dates appear to have been entered years after the births, I’ve not seen anything that contradicts the information – at least so far.  Our grandfather, Jess, was the fourth of five sons.  The five boys were followed by five girls, but, tragically, Eva, Ruby, and Frances did not survive. They are buried back in Tom Green County.  (5)

And now for the faces…

This undated picture of Jesse D., Ocie, and their seven children is the only one I’ve seen of them together. The image is a little dark but still powerful and one of my favorite discoveries.  (6)

Here’s a transcription of notes filed with the picture:

“Sitting front left, Thelma, Right, Annie
Next row back Lee, Ellis
Back  Jess, Ocie Ola, Jesse D., Henry, John” “Tank in back…water pumped from well…windmill pumped to 2 barrels…run into dirt tank…boys would catch fish from Cocho river [Concho River, in Tom Green County] and put live in dirt tank.” (7) I’m estimating the date of this picture to be 1905, making Jess at the far left about ten, and the little girls six and four.   Except for  Henry, the oldest, who had married by 1910 and remained in Water Valley,  this is the group that came to Sierra Blanca in 1911.  (8)

By the time, Jesse D. died in 1949, the family included 17 grandchildren and 14 great grandchildren.  (9)  Only Thelma’s son, Tom D Ellison, remains in Sierra Blanca, one year short of the centennial anniversary of the family’s arrival.   But he is a worthy representative, whom you’ll meet at length another day.