I have many – mostly small – family photographs that are unlabelled, and beyond that, not even associated with a particular side of the family. I’ve already commented on my “provenance” challenges. But the pictures of this couple were di…

I have many – mostly small – family photographs that are unlabeled, and beyond that, not even associated with a particular side of the family.  I’ve already commented on my “provenance” challenges.  But the pictures of this couple were different — fairly new reproductions on Kodak paper sitting among tintypes and daguerreotypes.  But I still didn’t know who they were. 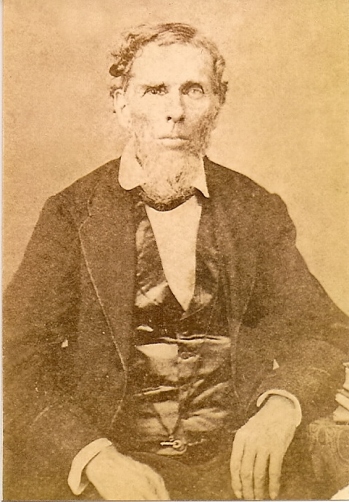 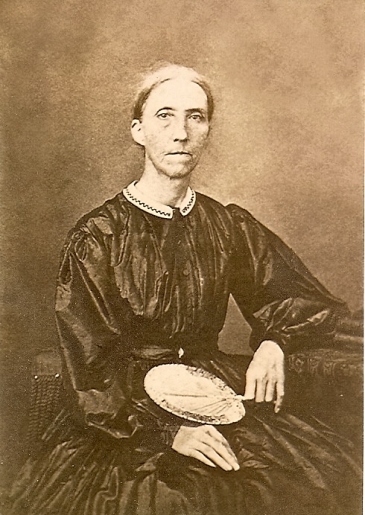 I wasn’t even looking for them when I took aim at one of the holes on my pedigree chart.  Cora Walling’s mother was named Louisa and most of  what I knew about her was uncovered by Elise when she interviewed Mom while working on a 5th grade school project.  According to Mom, Louisa always wore high collars, was as “deaf as a post” and used an ear trumpet.  She lived until 1936, well within Mom’s memory, and outliving her daughter Cora by 24 years.  We also knew that she was a twin – Mom passed along a picture of Louisa, her sister, and their brother. 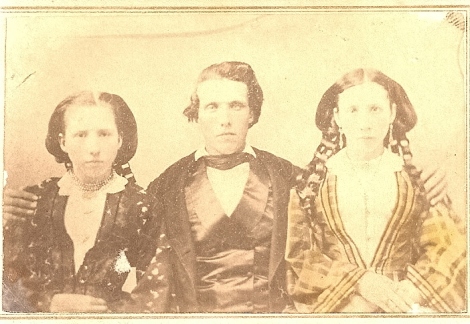 The only other picture of her I have is with her husband, George Washington Walling, and their nine children; she is at the far right and Cora is standing behind her. I’d estimate the date of the picture at 1882, after Cora’s first husband died and before she married her cousin James Walling. Comparing the two photos, I’d say Louisa was the twin on the right. 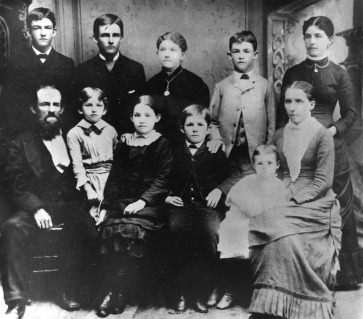 Back in December of last year, I discovered that images of Texas Death Certificates (1890-1976) are available at Fold3.  I went on a wholesale hunt for anyone named Walling who died in Texas – like shooting fish in a barrel (so to speak).  The 1936 death certificate of Louisa Walling revealed her birthplace as Tennessee and the names of her parents as J. W. Wright and Rachel Wright­­­.  (2)   Louisa didn’t quite live to be 102, as Mom had claimed, but she did live to the very respectable age of 98.

Armed with those clues, I headed to the census records and located the Wright family in Wilson County, Tennessee in 1850, the first year that all household members were individually enumerated. (3)  Joseph’s age was overstated at 60 (he was only 52); no occupation was listed but his real estate was valued at $3,600.  Like several others on the page, his birthplace was North Carolina; his wife Rachel, age 38, was born in Virginia.  Their children, son Robert, age 15, and daughters Louisa and Frances, both aged 12, were all born in Tennessee.

By 1860, the family had relocated to Travis County, Texas, but both Louisa and Frances had apparently already married and were gone from the household.  Robert was still living with his parents but so was his 17-year old wife with a first initial “F.”   Together, father Joseph, farmer, and son Robert, a merchant at age 24, owned real estate worth $10,500 and personal property valued at $15,000. (4)

Pursuing the Wrights back in Tennessee, I located a genealogical webpage for Wilson County (TN) page titled “TNGenWeb,” clicked on a link titled “Wilson County Tennessee Genealogy Depot,” then drilled down through “Photo Album” and “People and Families,” to see a number of links with the surname Wright and – as I live and breathe – one of them took me to a pair of pictures that matched! See them here:

[An aside best related right here – when I shared this information and link with Uncle Jerry in El Paso, he replied, “Now I can see where we get all our good looks!” ]

So the mystery couple are named – Joseph Wright and Rachel Hamilton Wright – the parents of Louisa and the grandparents of Cora.  The pictures had been posted in 2001; not surprisingly, my email to the address provided bounced right back.  Fortunately the poster’s name was “google-able” – a technical term for thank-heavens-she-is-not-Jane-Smith. I quickly located an alternative email address for Carolyn and it wasn’t long before I heard from her.  A descendant of Lewis Wright, Joseph’s brother, she lives in Tennessee but had followed the trail of the Wrights who left for Texas in the 1850s.  Safe to say, we were equally thrilled to make contact.

And Joseph and Rachel have a remarkable story!  Carolyn had posted a few interesting biographical facts about Joseph with his picture.  Civil engineer, surveyor, and one of the first physicians in Austin  — none of which was revealed by the census — he was known for laying out the campus that became the University of Texas at Austin, Mom’s alma mater.

Carolyn passed along a lot of research notes, copies of original sources, and many, many pictures, including one of the house built ca. 1815 by Joseph’s parents, Lemuel and Charity Wright, in Tennessee, 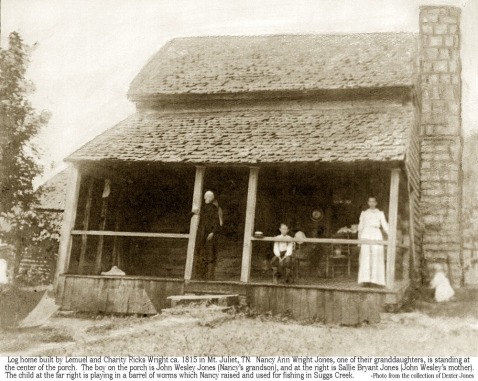 and the home of Joseph and Rachel Wright in Austin, now part of Austin museum Pioneer Farms. 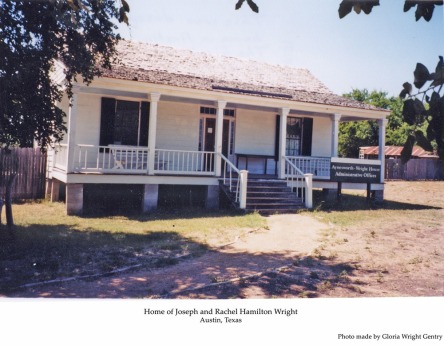 Before it was moved to the museum grounds, though, it was a branch of Franklin Savings, and the bank used Joseph’s story as part of an advertising campaign. 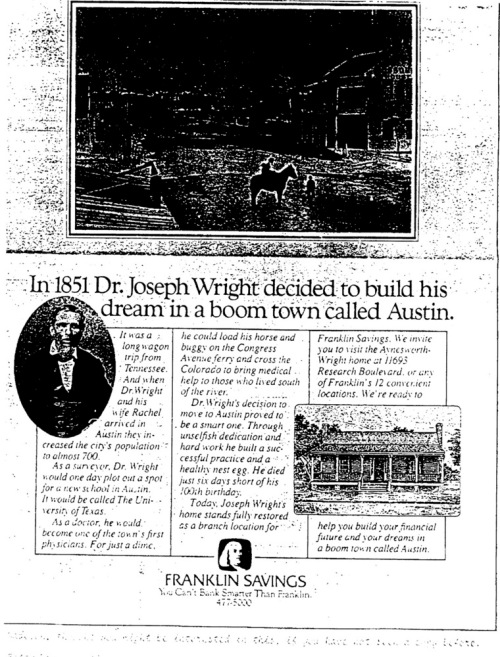 A fuller biography and an account detailing the Wright family’s migration from (possibly) Maryland to North Carolina to Tennessee to Texas will have to wait for now.  Too many interesting story lines, too little time!  But when the story is told,  it will be rich in detail, thanks to genealogical gifts from cousin Carolyn in Tennessee.

(1) The contrast on the 1882 Walling Family photograph was enhanced by graphic designer Bob Gillespie.

6 thoughts on “Putting the Wright Name with Faces”