This story is about my dad and the game of golf and the careful documentation of a remarkable par. The Himalayas #5 Golf Story could have been just a legend but, instead, it is totally nailed. The participants are Jim (protagonist/Dad), Earl (atte…

This story is about my dad and the game of golf and the careful documentation of a remarkable par. The Himalayas #5 Golf Story could have been just a legend but, instead, it is totally nailed. The participants are Jim (protagonist/Dad), Earl (attestator/eulogist), and Bill (artist/narrator).

This picture hung on the wall of our family den, and now hangs in my upstairs hall:

On the back is this card:

The #5 on Prestwick has evoked this commentary, “A blind, uphill par-3 hole that can play over 200 yards, the Himalayas is one of the greatest hit-and-hope holes in the game…It might amount to the most fun you can have on any hole in golf.” (1)  Dad would agree.

I took the picture to his memorial service in 2008, and Earl told the story to those who had gathered. Since, on that day and in that moment, I wasn’t able to absorb it, I asked for details in writing.

And, thus, the written account from the artist, Bill …

“Jim was playing in a golfing foursome with Earl, Chuck and Bill… As usual, there were minor stakes involved but bitter competition. We came to a par three of perhaps 160 yards in length. Although not overly long, it posed a unique challenge, for about 25 yards in front of the tee was a steep cliff rising up 40 or 45 feet in height with the green out-of-sight somewhere beyond. As if this were not challenging enough, any shot not clearing the embankment would fall into a typically deep Scottish bunker at the base of this cliff.

Earl hit first, and hit a magnificent shot over the hill and precisely on the line suggested by our caddy and hopefully directly toward the green. Chuck and Bill hit next with both shots clearing the hill but with less precision as to direction.

Then Jim hit! Oh such misery. The shot hit into the cliff and plopped into the bunker. No one said a word. The silence was deadly. The three successful hitters then proceeded along the path up the slope beside the cliff, and from a vantage point, perhaps 3/4’s of the way up, stopped to watch Jim hitting from the bunker. 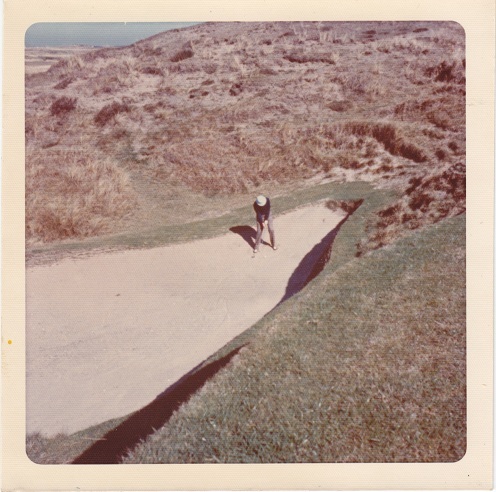 It was a mighty blow, struck just exactly as intended so that it flew over the cliff and toward the green. As we would discover when arriving there, Chuck and Bill were off the green, Earl was on the green but a goodly distance from the hole, but Jim’s ball was resting only 8 feet from the pin! Wow!!

Chuck and Bill chipped on …putted for their bogeys. Then, Earl studied his lie and line, putted very carefully but a bit too tenderly so that he ended up only just inside Jim’s position. Earl then marked his ball and let Jim putt – no doubt hoping to learn a bit since they were on nearly the same line from the hole. Jim also carefully examined line and slope, took putter in hand and, without hesitation, holed the putt for a par!

From nearly the same distance, Earl missed and finished with 3 putts and a bogey.

On the way to the next tee, Jim walked quietly, smiling, not saying a word. Earl was stomping along, white spots in his cheeks, muttering…..“I hit a beautiful shot on the green and get bogey while he hits into the #$%#@ trap and gets par. This game isn’t fair #%$&^*.” (2)

It wasn’t the only such moment between the two men (and many times it went the other way) but it was the most memorable. Earl later said of Dad, “he was the probably the greatest gamesmanship golfer I ever played with. It wasn’t for money. It was all about the pride.” (3)

Walking quietly and proudly, with a smile, the essence of Dad is in this story.

And because every detail is documented – the picture, the signed and dated label, the account of the day – those who follow will also know.

One thought on “The Himalayas #5 Golf Story”