For the last year, I have been a volunteer at the Baltimore City Archives (BCA), where a three-year partnership with the Maryland State Archives (MSA) has revived the once-vibrant program. I arrived on the doorstep of BCA just as agreement was rea…

For the last year, I have been a volunteer at the Baltimore City Archives (BCA), where a three-year partnership with the Maryland State Archives (MSA) has revived the once-vibrant program. I arrived on the doorstep of BCA just as agreement was reached, and so have enjoyed a front row seat for the transformation.

If you haven’t used up your 15 free hits at The (Baltimore) Sun hits this month, you can read about the partnership here.

Back in the 1930s, FDR’s Works Progress/Projects Administration (WPA) conducted Historic Records Surveys (HRS) at hundreds of repositories across the country. The varied products of those surveys – inventories, indices, local histories, abstracts – are of continuing and great value to the genealogist.

In Baltimore City, the centerpiece was a numerical arrangement of historical documents. The WPA workers organized documents first by year, then agency of origin, the in series (in the traditional archival sense) and numbered each individual item. Hierarchically arranged item-descriptions were typed on onion skin paper and then bound into volumes:

Today, BCA staff and volunteers are entering those item-level descriptions into the MSA’s Guide to Government Records database. So far, over 14,000 item level descriptions have been mined – volumes up until 1830 are fully transcribed.  Typing goes on….

Content created in the 1930s will be available to anyone with a computer and internet connection. That’s true in many situations but when you consider the temporary workers bent over their typewriters (and for some reason I see them in green visors), it seems a bit like a miracle.

I’ve moved on from City Commissioners (street openings and the like) to a record group with greater genealogical possibilities – Mayor’s Office – Mayor’s Correspondence – Applications for Positions – in 1857!

The page from which I am typing looks like this: 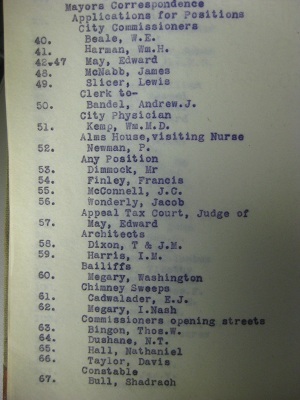 Mayor Thomas Swann had just won re-election to his second term and political patronage was in clear evidence. Many of the letters heap praise on the applicant’s character, mention his dependent (and probably large) family, and his strong American Party credentials. But this impressive petition, on behalf of Joshua Jones, cites only political activity as his qualification for the position of constable. 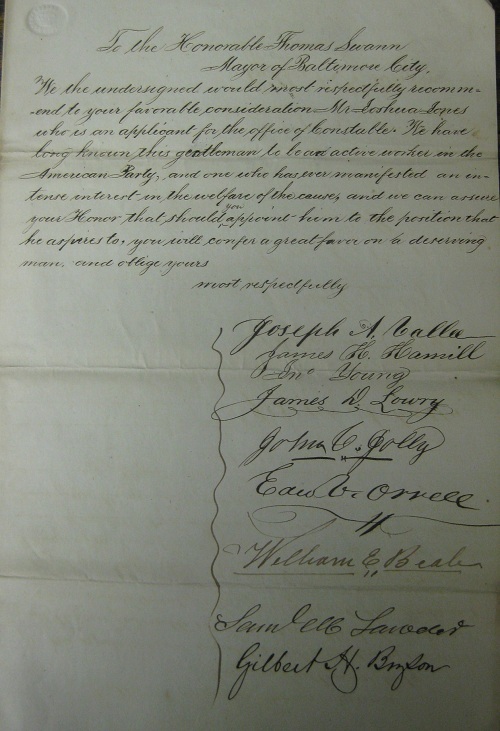 Dr. William M. Kemp, of the Board of Health, took a more subtle tack…

“Presuming that the numerous calls that are made upon you in reference to appointments are troublesome, I have felt it due to you not to add to the annoyance by calls in my behalf. On this ground, I have felt impelled to decline the kind interference of friends.”

No word on how that strategy worked out for Dr. Kemp!

In my next post, I’ll describe the process by which a genealogical researcher can locate City records with personal interest.

One thought on “Even More Riches – Even More Local”