Earlier this summer – just to keep my hand in – I went on a few cemetery field trips right here in Baltimore. A friend and colleague taught a graduate level public history course on cemeteries and allowed me to tag along on the Saturday field trip…

Earlier this summer – just to keep my hand in – I went on a few cemetery field trips right here in Baltimore. A friend and colleague taught a graduate level public history course on cemeteries and allowed me to tag along on the Saturday field trips.

One of those trips was to Old St. Paul’s Cemetery downtown in the shadow of the University of Maryland Hospital Campus — just along Martin Luther King Boulevard. I’ve passed it scores of times and never knew exactly where it was.

It’s associated with one of the most historic Episcopalian churches in town with interments dating to 1784. Many significant figures and prominent Baltimoreans  are buried here – Revolutionary War hero John Eager Howard, and Samuel Chase, signer of the Declaration of Independence, to name a few.

But it was Nelly Webb’s marker that caught my attention… 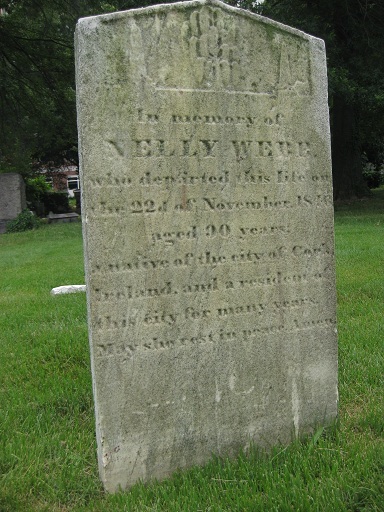 Using a water spritzer bottle, a rag, and a collaborative effort, her marker was transcribed:

At the top are weeping willow trees, used in the nineteenth century as a symbol of grief and sorrow.

Intrigued by the notion of a seemingly single Irish woman resting in this place, I could not resist the urge to probe a bit.

Nelly’s death was reported in the Baltimore Sun on November 25th, 1846.

“In the court-house she will long be remembered, and her bending form, humble apparel, and little black bonnet, as it was daily seen in term, threading the circle to the criminal’s bar of the city court, and leaving with the prisoner a liberal pile of cake and fruit, will not soon pass from the retina of the mind’s eye.”

Another source called her “a most eminent and eccentric vender of pies, apples, cakes and nuts.”

It seems that Nelly had a unique business model. Casual visitors to the court paid cash for her delectables when they came to do business but regulars at the courthouse had a more complex system of remuneration. After submitting a one-time entrance fee to Nelly, customers ranging from clerks to lawyers to judges had annual “arrangements” with her, whereby she collected monetary “gifts” according to the individual’s financial capacity.  Then, throughout the year, they could partake of her wares, paying as they pleased.

Special occasions invoked their own ritual. When a member of the legal community took a wife, the expectation was that Nelly “be remembered.”  In turn, she would contribute food to the wedding gift display. With the money that Nelly accepted from the wealthy, she subsidized gifts given in great kindness to those who were guests of the court for more troubling reasons.

Only she had access to both the grand and petit jury rooms as they deliberated and she was allowed to interrupt the most consequential court proceedings to deliver her treats.   Chief Justice Roger B. Taney once smiled upon her arrival…..”It is only Nelly, gentlemen – let us proceed,” as jury members registered shock.

Her exact age was not publicly known and perhaps generously estimated when her stone was ordered. It is known that she came to the country during the Revolutionary War with her husband who was a non-commissioned officer of the British army. She was reportedly well established in her profession by 1826 – she guarded her monopoly carefully, fending off the few who dared to challenge her.

At her death in 1847, Nelly left an estate that included a small frame house on Saratoga Street between Paca and Eutaw Streets. The widow of Mexican War soldier was named successor to Nelly’s office, but, as the Sun reported, “it is more than probable than some time-honored customs [were] abrogated forever.”