The distance was covered in an hour and twenty-seven minutes – 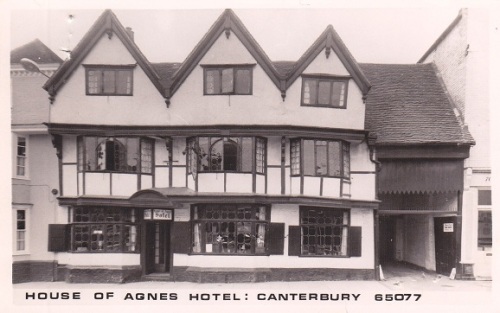 [Editor’s Note:  I’ve looked at websites and current reviews for several of the places we visited, including the House of Agnes Hotel.  And it’s interesting here to note what a difference forty years makes in terms of marketing materials!  House of Agnes – runner-up in the “Funkiest B&B of the Year” Contest of 2010-2011. Wonder what Mom would make of that….] 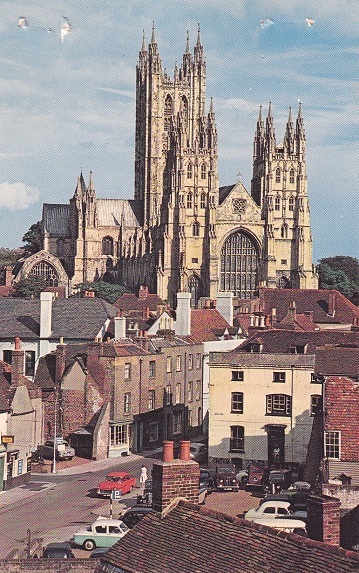 Of great interest to us was the Connection with St. Thomas Becket [Beckett] & his death in 1170 – The stained glass windows were beautiful –

We walked through the grounds of King’s School –

From the town of Dover we got a bus that took us up to Dover Castle – We were sort of alone up there (the 8 of us) for it was cold & very windy – We did see a large collection of armour in “The Keep”, the dungeons, as well as a beautiful view of the White Cliffs of Dover and the English Channel – On a clear day they told us you could see France

We walked down the path to the city and the docks – We passed the ruins of the church of St. James that had been built shortly after the Norman Conquest in 1066 – The members of the Garrison at Dover as well as the Duke of Wellington worshiped here –

Along our path we saw a statue of Mr. Rolls (of Rolls Royce fame) who was the first to fly across the Channel in 1910

We had dinner at “The Crypt” where our waitress put a bottle of Heinz Catsup on the table even before we ordered saying “You Americans have grown up on  it” – We all had a good old American steak, fried potatoes & ice cream – Jim couldn’t get a cup of tea – (Many places serve it only during the 4-5 o’clock tea hour – )

We raced to the R. R. Station only to discover the last fast train to London had departed an hour before & that the first slow one wouldn’t leave for another 25 minutes –

Finally comfortably aboard the ladies in one compartment – the gents in another, the train headed for London –

It was 10:10 p.m. when we got back to London – It had been a long, long day but we made a last stop at the Glass & Cask Pub to plan how we could best spend our last full day in London – So much yet to do & so little time!  While here Jim did get instruction on how to play Darts as played in some Pubs – Also we were told of a cider that is served in some Pubs that is be avoided – 120 proof