That’s what Tom D Ellison said to me as he swept his arm towards the boxes holding the files of his sister, Julia Mae. And, indeed, my recent trip to Texas was motivated by the knowledge that Tom is now the caretaker of Julia Mae’s work. They were…

That’s what Tom D Ellison said to me as he swept his arm towards the boxes holding the files of his sister, Julia Mae.  And, indeed, my recent trip to Texas  was motivated by the knowledge that Tom is now the caretaker of Julia Mae’s work.  They were Mom’s first cousins and we were fully aware that Julia Mae was the Williams family historian and that she worked tirelessly to create the Hudspeth County Museum.  I don’t remember meeting her as a child, and, unfortunately, this trip was too late by seven years.

But I was ever so grateful for her collection of Williams family documents, pictures, and obituaries (it would have taken years to gather those alone!)  My new portable scanner was abuzz with activity.  I don’t know enough yet about Julia Mae from those with whom she worked on history projects, but I do have a few pictures to share – one is among my favorite trip finds.

I visited Julia Mae’s grave with Tom D and Uncle Jerry, and Tom proudly pointed out her nickname carved on the back.

And one more of Julia Mae (undated):

So at least now you have a mental picture of the family historian, who, among many other things, kept a very important notebook.  Here it is – one of the most unique finds at Ellison Motor Company  – it’s a simple brown spiral notebook, in which (it appears that) Julia Mae organized notes of conversations with her grandfather, Jesse D. Williams (our great-grandfather). He lived with Julia Mae’s family after Grandma Williams died and he lost his sight. [I think] it’s an original source with secondary information – but with very direct evidence! – in case you were wondering.

In my last post, I shared what I knew about Jesse D.’s siblings before I went to Texas.  Here’s a picture of Julia’s notebook page on this: 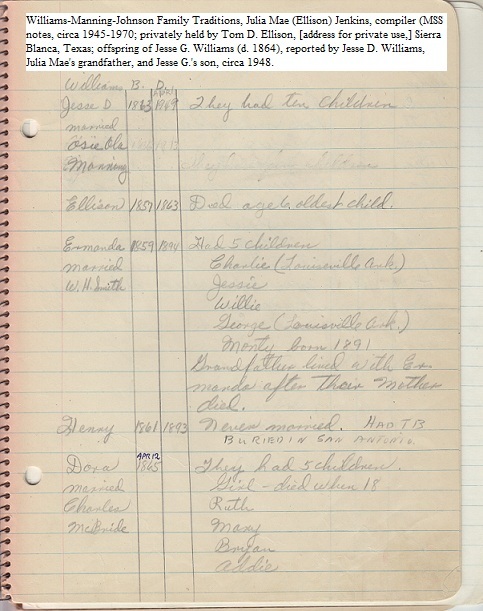 She  was a pre-Excel chart person — I love that!  Some death years differ from previous accounts but the big questions are answered.  Ellison, the oldest, died when he was six — the same year that Jesse D. was born.  Amanda and Henry both died fairly young; Henry never married.  And  Jesse D. lived with married sister, Emanda [Amanda] after their mother died.  (And I did locate them in the 1880 census [J.D. Williams with W. H. and A. Smith] — with just that bit more information.)   The only siblings left after 1892 were Jesse D. Williams and Dora Williams McBride — and, as you will see from later posts, they and their families kept in close touch.

Thank you, Julia Mae.  We really do owe you so much!

One thought on “We Owe Her So Much”