[Back to the other half of my daughters’ heritage……] Alice Henriette Pauline, born in Amsterdam in 1898 to Jacobus Berlage and Alice Anslyn Berlage, was only seven years old when her father died in 1905. (1) She was the oldest of three; brothe…

[Back to the other half of my daughters’ heritage……]

Alice Henriette Pauline, born in Amsterdam in 1898 to Jacobus Berlage and Alice Anslyn Berlage, was only seven years old when her father died in 1905. (1)   She was the oldest of three;  brother Thomas was six and sister Cecile was five.  Within a year, their mother married a second time – to Robert J. Fellner, a Boston-born member of the Amsterdam Stock Exchange.  Alice Berlage Fellner gave birth to their son, James, in 1907.

Fellner subsequently assumed financial positions in London and later in New York. (2)  In 1910, they were residing in Manhattan on West 86th Street, where a butler, a maid, and a nurse rounded out the household. (3)   It was definitely an upscale neighborhood.  Listed immediately above them was the Bonwit family, headed by Paul, a merchant; the Bonwits had four live-in servants. (4)  After a two-year stay, the family returned to England, where the Berlage siblings all attended school. These years were dotted by trans-atlantic crossings.

When young Alice finished school at the age of 17, she was sent to Holland for six weeks “to catch a wealthy husband.”  Upon her return to London from the failed mission, she accompanied her mother and stepfather back to New York where they took up residence at the Kenilworth Apartments on Central Park West. On her 18th birthday, January 30, 1916, Alice “came out” at a dinner party at Delmonico’s.  She recalled that it was attended by 50 to 75 people.  The New York Times, however, reported twice as many guests, and referred to Alice as the daughter of Fellner.  (5)

No suitors on the horizon, she travelled to England to spend the summer with friends, and it was on the return voyage that she met Lawrence G. Odell, a native of Boston then resident of Akron, Ohio. The S.S. Finland departed from Liverpool on November 16, 1916, and arrived in New York on December 4, 1916; their names both appear on the passenger list, she as an alien, and he as an American citizen.  (6)

[For a brief history of the vessel subsequent to its role in the family romance, take a look at a USS Finland (ID # 4543) in 1918-1919 provided by the U.S. Naval Historical Center.] After disembarking, the couple’s courtship was primarily long-distance, as Lawrence continued to travel widely for his employer, Goodyear Tire and Rubber Company.  Less than two months after their meeting, he departed on a six-month trip that included stops in Japan, China, Sumatra, Federated Malay States, and Ceylon. (8)  He left pre-addressed postcards in the United States to be mailed to Alice weekly until he could write from the Far East.  During his absence, Alice travelled to Massachusetts and spent a month with her future mother-in-law. According to Alice, her stepfather thought her suitor did not have enough money and that she “could do better” but her mother’s attitude was more in the nature of “good riddance.”   So Alice and Lawrence were married at historic St. Patrick’s Cathedral, on 5th Avenue in New York City, on her twentieth birthday –  January 31, 1918, two years to the day after her coming-out party.   [Some of you may notice a family resemblance; I find it pretty striking!] (9)

And, once again, the happy event was reported by the New York Times. (10) 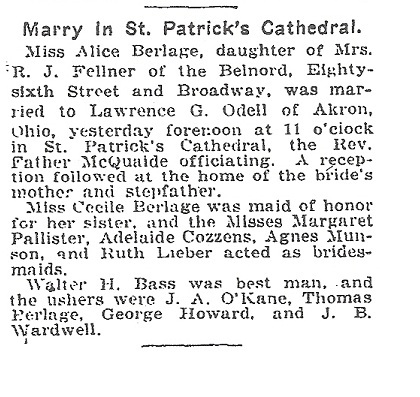 Lawrence and Alice were married for over 50 years and raised a family of five daughters and four sons. (11) 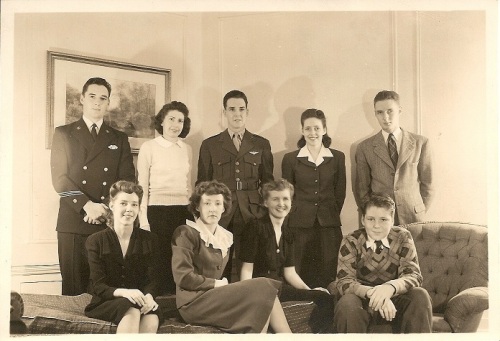 Grandpa’s standing on the far right. And that’s a room full of stories right there!